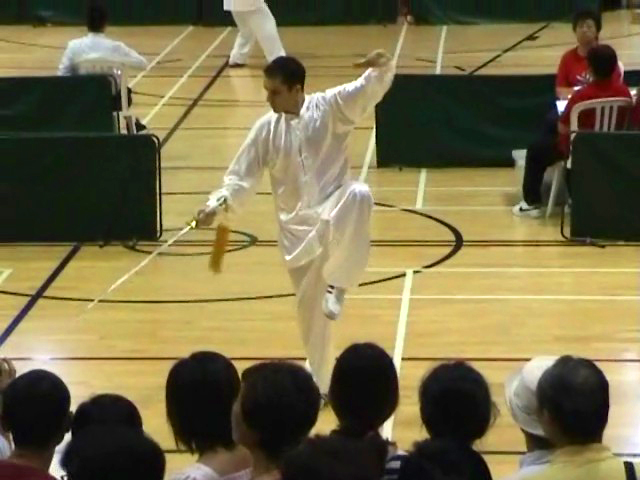 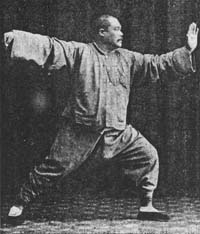 Yang Luchan (1799-1872) was born in the Yongnian County in north China’s Hebei Province. As his family was very poor, he left his home village as a young boy of 10 for Chenjiagou in Wenxian County in central China’s Henan Province to make a living. There he served as an attendant in the Chen family and was taught the Lao Jia (old frame) style of tai chi from the famous master Chen Changxing (1771-1853). After 30 years of hard practice and study, he returned to Yongnian.

Back in his family home again, he worked in the Tai He Tang medicine shop which was run by the Chen family of Chenjiagou. The house belonged to the Wus and their three brothers – Wu Chengqing, Wu Heqing and Wu Ruquing. They were very impressed with Yang’s tai chi and asked him to start teaching them.

Soon Yang’s fame began to spread for his unusual style of martial art. Until then, martial arts had all been a battle of strength, power and speed, however this ‘cotton boxing’, ‘soft boxing’ or ‘solvent boxing’ as it was known amazed the local people for its effectiveness in overcoming strong opponents with ease. 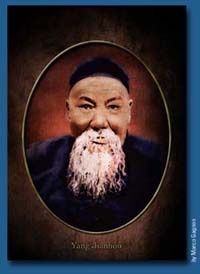 There is a colourful story about Yang Luchan that is reported at this time. Wu Ruqing was a councillor at the Sichuan office of the Judicial department of the imperial court. He asked Yang Luchan to teach tai chi in the capital city of Peking to the nobles and kinsmen of the Royal Dynasty. There also lived Prince Duan who employed a large number of fighters who were all keen to test Yang’s skills, however he always declined. Finally, a well-known kung fu master insisted on a competition to see who was stronger. The master suggested they sit on two chairs opposite each other and placed their right fists against each other.

Yang relented and shortly after the contest began, the kung fu master started to sweat and his chair creaked as if it was about to fall apart, but Yang looked as serene and composed as ever. Yang then got up and said to the onlookers, “this master’s skill is indeed superb. Only his chair is not made as firmly as mine.”

Yang was famed for being able to throw any opponent to the ground without injuring him, and soon became known as “Yang the invincible”. He was later appointed as kung fu instructor in the Qing court at the highest level. His son, Yang Jianhou (1837-1892) was also very proficient in tai chi and after defeating a famous challenger called Liu he also gained the same prestigious nickname as his father.

As his number of students increased, Yang Luchan revised the Lao Jia (old frame) series of movements with his eldest son, Yang Shaohou and his third son, Yang Jianbou (1839-1917) into the zhong jia (Medium Frame) set. Later this was revised again by Yang Chenfu (1883-1936), the third son of Yang Jianbou, which finally developed into the present Da Jia (Big Frame) style. 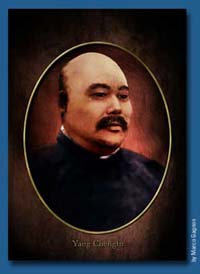 The Yang school of tai chi was therefore born out of the Chen school which was known as Lao Jia (Old Frame). The movements are relaxed and graceful, seemingly simple and follow circular motions and paths, like “reeling raw silk from a cocoon.” Yang Chengfu described tai chi as “an art with great strength concealed in gentle movements, like an iron hand in a velvet glove or a needle concealed in cotton.” He cautioned students to keep “roundness” and “relaxation” in their movements which must be gentle, flexible and smooth to be synchronised with one’s mind. 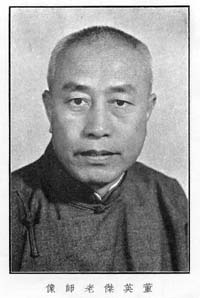 Dong Ying Jie and Yang Chengfu collaborated on a ‘fast set’ which was unfinished at the time of Yang’s death. Later, Dong finished it. The fast set incorporates some of the faster, powerful moves of the Lao Jia. Learning this set helps tai chi students understand how power is created and expressed in tai chi from the seemingly soft and slow movements. 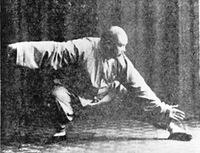 Tai chi is practiced in a slow, relaxed and deliberate manner. Amongst other things, this helps develop balance, coordination and allows you to concentrate on the fine detail of the ‘internal’ and ‘external’ aspects each posture and movement.

The power and energy in tai chi is developed by the legs, commanded by the waist and manifested in the hands. As you learn to perform the movements correctly with the right ‘feeling’, this energy moves through your entire body, connecting it together and controlling it in the most natural way.

Tai chi uses ‘soft’ force to overcome a ‘hard’ force. Whereas most fighting arts focus on merely developing greater speed, strength and visual reflexes than a potential opponent, tai chi uses sensitivity, yielding and deflection. This method does not pitch strength against strength, which would waste your energy and your strength alone might simply not be enough compared to your opponent. Instead it redirects an opponent’s power away from you and then back against them, adding your own to create a devastating response (should you wish). 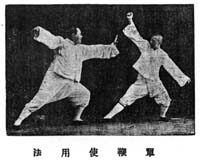 Even for people who don’t study tai chi as a martial art, it is important to understand the fighting applications in order to keep the method correct. However, the other side of tai chi that it is an intensely personal development with exceptional mental and physical health benefits.

The blend of relaxation and concentration enables you to reach a meditative state that helps you to free your mind from its usual concerns (work, money, family problems, etc.) and concentrate on yourself – something we rarely get a chance to do today. Tai chi will keep you in excellent physical shape, giving your body a youthful elasticity, flexibility and strength that the wear and tear of a gym quickly destroys. At higher levels of practice, the control of your energy (or chi) has limitless benefits that must be experienced to be understood.